I once had a fur-baby named Bobbie. Bobbie was a pompous Pomeranian. He had an expensive taste in regards to food, toiletries, clothes, and other doggie paraphernalia. You wouldn’t even see him pooping elsewhere other than my pink plush rugs! 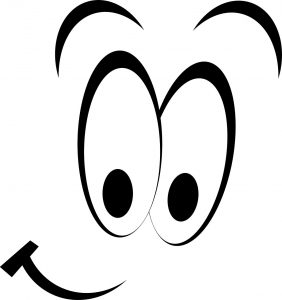 Although Bobbie was sometimes overbearing, he also made me realized that the best things in life come in tiny packages! Every day he would wage war against evil forces — rats, cockroaches, mosquitoes, and kissing bugs. When the battle is won, Bobbie would retreat to my bed and cuddle his momma. Isn’t he the sweetest boy?

My experiences are just a few of the many reasons why people love small canines. Don’t get me wrong, though. I love big dogs, just the same! But if you are looking for a little furball to add to your pack, perhaps you can find some inspiration from this article. 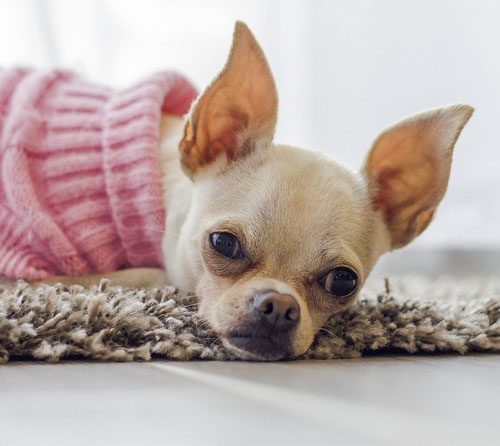 Chihuahuas hail from Mexico, but the earlier version of the breed is probably much larger than the ones we see nowadays. Experts say these saucy pooches are the descendants of the Techichi.

Despite their bantam size, Chihuahuas have a big, smart brain! Be careful not to poke their heads, though. Chis have a “molera” on their head, which is comparable to the fontanelle of an infant. Likewise, don’t panic if your pet has a bulbous head. Chihuahuas are either apple-headed or deer-headed.

Contrary to their murky past, Chihuahuas have a bright future in the showbiz industry. Chis have fame thrust upon them. Aside from the famous Taco Bell ad in the 90s, you will find them in Hollywood movies, too.

The breed is also a favorite tote-along companion among A-list celebrities, such as Paris Hilton, Demi Moore, and Madonna.

Don’t take those little fangs too lightly, by the way. Chis can be very feisty! In fact, the Chihuahua only scored 69.6% in the temperament test conducted by the American Temperament Test Society. Back in 2014, a gang of feral Chihuahuas even terrorized a neighborhood in Arizona.

Therefore, don’t spoil your Chi too much! Most importantly, be sure to socialize your fur-baby at an early age, so he will learn to be docile and friendly towards others. 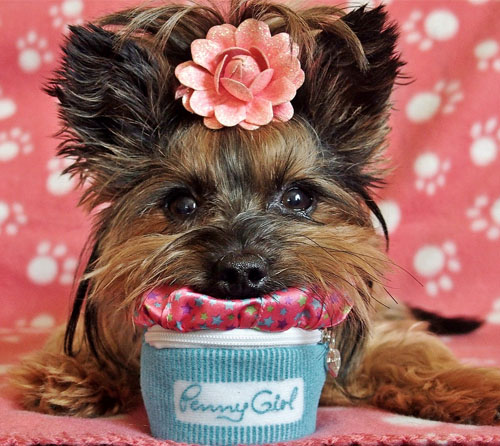 Why can’t I have long, silky locks like the Yorkie? Yorkshire Terriers are notable for their smooth and shiny hair.

But did you know that their hair would continuously grow just like ours?

Yorkshire Terriers are high-maintenance, I tell you that! But back in the days, these cuties used to be pest exterminators. Their compact size allows them to squeeze themselves into crevices and take on rats.

These adorable ratters were once called “Scotch Terriers” since they originated in Scotland. However, the breed was further developed in England, and in 1870, the official name change took place. The Yorkshire Terrier is among the oldest registered breeds in the American Kennel Club.

Yorkshire Terriers can also fight against bears apart from garden-variety thieves. In 2015, a brave Yorkie put his life on the line to save his fur-dad from a 200-pound black bear. Fortunately, the two were alive to tell the tale. Yorkies are also excellent watchdogs, as they are vigilant. These little guards will woof at anything strange.

While they are at it, you might notice they make a honking sound like a goose. Yorkshire terriers are prone to reverse sneezing brought on by allergens. This phenomenon may seem alarming to see, but the noises are harmless and will pass. 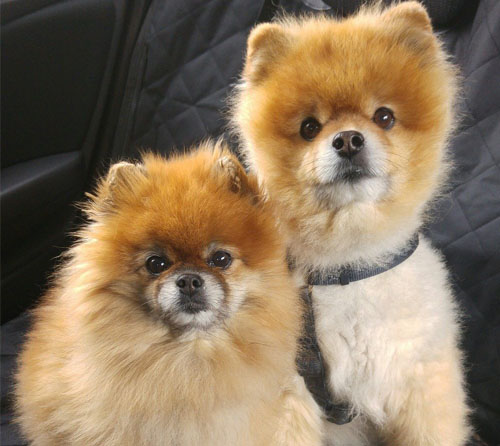 Pomeranians hailed from Iceland. These tiny balls of fur are the close relatives of the Alaskan Malamute, Siberian Husky, and Samoyed. However, the breed was further developed in Pomerania, a province in the region of Northern Europe. Hence, the name.

So, if their cousins are large, why are they so dang small? Back in the days, Poms weren’t always so little.

In fact, these cuties used to pull sleds and herd reindeer. The Poms of old used to weigh four times their average size today. But they were bred down by Queen Victoria and became lapdogs.

But the queen of England isn’t the only historical figure to fall for this breed, World changers, such as Sir Isaac Newton, Michelangelo, Mozart, Martin Luther, and Teddy Roosevelt all had Poms.

Mozart has even dedicated one of his expressive melodies to his Pom, Pimperl. “Waltz of the Little Dogs” by Chopin was also inspired by a Pomeranian. Nowadays, Pomeranians are Internet sensations. A good example would be Boo and Buddy.

Pomeranians, however, are always oblivious of their size. These pint-sized dogs will even take on big canines. Even Bobbie used to bully my Labrador before they became friends. Therefore, it is wise not to spoil your pooch and implement training and early socialization. 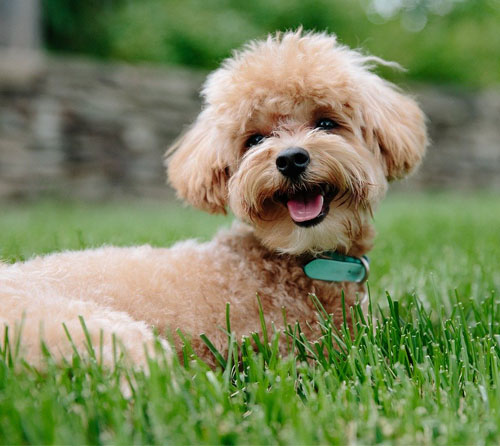 Poodles aren’t just for dog shows. These fancy pooches rank the second most intelligent canine in terms of obedience/working, instinctive, and adaptive intelligence.

In fact, a toy poodle named Nala figured out how to use an elevator, so she could visit her friends at a nursing home in Minnesota. Poodles are also adept circus performers back in the 1800s.

However, France’s National Dog is not of French descent. Poodles came from Germany, where they were called “pudel,” which translates to “puddle.” Before the glitz and glamor, Poodles hunt and retrieve game fowls from the water.

Moreover, the Poodle is the only breed that comes in three sizes: standard, miniature, and toy.

Toy poodles would be the best choice for those who lead a less active lifestyle or live in an apartment. Poodles don’t demand rigorous workouts, but they do need tons of mental exercises to keep them hale and hearty.

Poodles are also perfect for allergy sufferers because they have hair, not fur. Just like Yorkies, Poodles will not shed but will grow hair continuously.

Because many people covet this type of coat, the Poodle has been bred with other popular dogs to make more hypoallergenic breeds. However, regular grooming is crucial. If left unchecked, your pet’s hair will become matted.

No one knows about the Papillon’s ancestry. Some say they hailed from China since they look similar to the Pekingese. Others also believe they come from Japan.

Experts, on the other hand, say these dogs trace their roots in Europe. After all, the name “Papillon” translates to “butterfly” in French. But they also went by other nicknames, such as “squirrel spaniel” and “dwarf spaniel.”

Papillons stand out from the crowd because of their butterfly ears. However, some pooches sport “moth ears,” which are floppier and droopier. Nevertheless, the American Kennel Club recognizes both types under the same breed.

Although Papillons have the reputation of being the toy dogs of the rich, you can’t expect them to lounge on their luxury bed all day.

These pint-sized canines are a ball of fire! You need to keep them entertained by introducing interactive games. Otherwise, they will tear your house down and make you lose your marbles.

Small dog breeds are ideal companions for everyone, particularly for first-time owners and city dwellers. If you have kids, they can benefit from the companion offered by a small dog and learn to become responsible for taking care of it.

By nature, these furry munchkins are a lot easier to manage than their bigger cousins. Their needs are also far smaller, and they won’t knock over your TV set or surf your kitchen counter during your absence.

If you are a frequent traveler, your pooch can always tag along since there are plenty of carrier options for small dogs.

Nevertheless, always remember that you can never measure how much love dogs can offer you. Big or small, any dog will always be a gem! And having any of the small canines listed in this article will surely bring sunshine to your life!
SaveSavedRemoved 0

Blue Buffalo vs Nutro – What is the Best Natural Pet Food Brand?

Added to wishlistRemoved from wishlist 3

Royal Canin vs. Pedigree: Does a Higher Price Equates to Better Quality?

Added to wishlistRemoved from wishlist 1

IAMS vs. Purina ONE: Which Brand is Better for Cats and Dogs?

Added to wishlistRemoved from wishlist 3

How to Use a Flea Comb for Dogs