No one likes to come home or visit someone’s house smelling of cats. While regular litter box maintenance is the key, it is always easier said than done.

No, you are not being lazy. Hectic work schedules, minor inconveniences, and forgetfulness due to stress sometimes stop us from being consistent with our litter box cleaning routines.

Unfortunately, ammonia from cat wastes builds up rather quickly. Before you know it, your entire house smells like a litter box!

Dubbed as the “Ultimate Cat Litter Disposal System”, it seals litter clumps along with the smells. By hygienically sealing a number of soiled litter, it reduces trips to the bin so that you can relax and spend more time with your whiskered friend.

In a hurry? Here is a quick overview of the products:

The Plus pail has been integrated with antibacterial properties during the manufacturing process; this will inhibit the growth of bacteria and fungi. 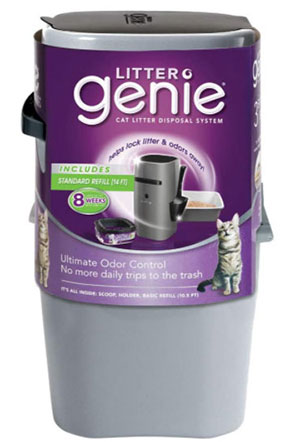 Let us start the ball rolling by reviewing the Litter Genie Standard Cat Litter Pail. If you have ever seen a diaper pail before, I bet you already have an idea how this product works because it is created for the same purpose as the other — only this time it is for the benefit of cat owners.

The Litter Genie offers the most convenient and hygienic solution to cat waste disposal. Along with the pail, you will receive

With this disposal system, you no longer have to take out soiled litter every morning and night. All you have to do is snatch up the clumps, open the lid of the Litter Genie, and drop the bombs!

You can fill the bag with soiled litter and take out everything once a week or every two weeks, depending on the number of kitties you have. The pail features a push-and-lock system to seal off odors that could otherwise send your guests running to the door.

Sounds too good to be true? If you are on the fence, know that Jackson Galaxy recommends the Litter Genie. The official Cat Daddy himself has some of these products in his home.

Aesthetic-wise, there is nothing about the Litter Genie that makes me giggle with joy. On the sunny side, I do like that it is compact so that I could conceal it somewhere my eyes could not see. 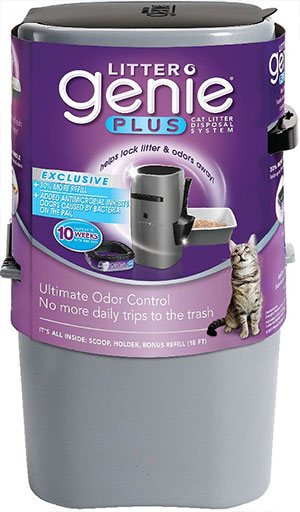 The Litter Genie Plus Pail is a godsend to cat parents who are on the verge of losing their sanity! If you are troubled with the overpowering stench of urine and feces, then rejoice because there will soon be no more.

While the Plus model flaunts the same amazing features as its predecessor, I reckon it is way ahead of the latter because of one small addition — antimicrobial properties.

Antimicrobial additives were integrated into the plastic during the manufacturing process; thereby, inhibiting the ability of bacteria and fungi to grow on the interior surface of the pail.

Believe me, the odor control is phenomenal in this one! The quality and odor-trapping efficiency of the bags lasts at least two weeks longer due to antimicrobial properties.

The Plus is also available in black, although the fact remains that it is an eyesore from a design standpoint. Hence, you may want to stash it behind a piece of furniture.

I would say there aren’t many differences between the Litter Genie vs. Litter Genie Plus. This model uses the same spring mechanism that allows the waste to fall down into the bag, locking up horrendous odors almost immediately. 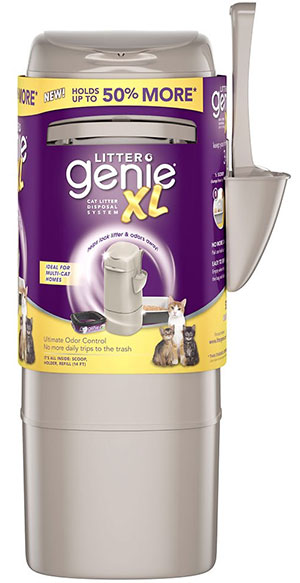 Scooping soiled litter will never be pleasurable, especially if you have a legion of cats at home; however, the Litter Genie XL Cat Pail promises to make the experience less troublesome for you.

Similar to the two products above, it serves as a wastebasket for Fluffybottom’s doo-doo, preventing the icky stench from assaulting your nostrils.

The pail features a durable built that even a robust pooch could not break open. Likewise, it uses the same continuous liner, which you need to knot to form a bag.

Basically, this model is a larger version of the original Litter Genie. If you have one cat, you’ll enjoy having a black hole of continuous poop disposal for up to three weeks!

While the Litter Genies are not meant to be pretty, these products are a lifesaver! On the outside, they look like an ordinary trash can. Nevertheless, things get a tad complex on the inside, which I will tackle later.

First of all, the three systems differ in terms of size: 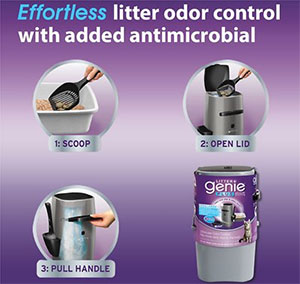 The top portion of the Genies contains the detachable cartridge that dispenses a continuous bag, which is open at both ends. You will need to draw out enough plastic, so you could tie a knot and keep the soiled litter within the bag itself. From there, you will need to pull the handle sticking out of the front of the units, so you could shove the bag down.

The same goes for when disposing of litter-covered wastes and wet wipes. Pushing the handle back to its original placement seals unwanted smells into the lower section of the Genies. Additionally, the top lid of the pails features an extra layer of protection.

To take a full bag, you will only need to open the bottom section. A safety razor is provided as well, making it a cinch to cut the bag and knot the top. Now, you are ready to toss the bag in the trash can outdoors!

As you can see, all three Litter Genies have the same functionality; each has a little slider, which serves as the first line of defense against reeking ammonia smells. 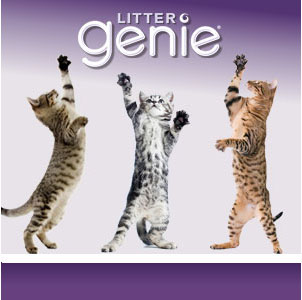 It is no secret that cat urine and feces pose a health risk to us, humans. What’s more, our whiskered friends are easily targeted by Toxoplasma gondii, a protozoan parasite that infected cats may also excrete along with their wastes.

That said, I can’t stress enough how important it is to disinfect litter boxes and litter pails as often as possible. While I don’t like to play favorites, I can’t help but choose the Litter Genie Plus as my best overall choice due to its antimicrobial properties.

The sturdy plastic construction of the Litter Genie Plus contained an integrated active ingredient to provide it with around-the-clock protection from fungal and bacterial growth.

Can I use a Litter Genie for dog poop?

In theory, you may use the Litter Genie to contain firm dog stools.

Where should you place the Litter Genie?

You should place the Litter Genie beside your cat’s litter box to prevent litter from trailing.

How do you get rid of cat smell in the house?

There are many things that can make your home stink to high heaven, and cat smells are often the number one culprit. So when you open your home — and your heart — to a cat, you will need to find the best litter box and make sure to properly dispose of soiled litter.

It is already 2021, yet many cat owners are still beset with litter box problems! While you can find an assortment of cat litter and litter boxes in the market, the problem of litter disposal still persists today.

Let’s be honest. Not everyone is physically capable of going outside a few times a day just to discard solidified cat pee.

Taking the wastes out to the bin is also time-consuming for the busy hands-on mom. Likewise, it is labor-extensive for those who live high up in an apartment complex.

This is something your good ole kitchen trash can could not handle. That is why it will work to your advantage to have a Litter Genie.

The Litter Genie disposal system does an excellent job of containing the pungent smell of your cat’s wastes for an extended period. Hence, you can empty the Litter Genie only when your garbage is due for pick-up.

Royal Canin vs. Pedigree: Does a Higher Price Equates to Better Quality?

Blue Buffalo vs Nutro - What is the Best Natural Pet Food Brand?

Blue Buffalo vs Nutro – What is the Best Natural Pet Food Brand?

IAMS vs. Purina ONE: Which Brand is Better for Cats and Dogs? 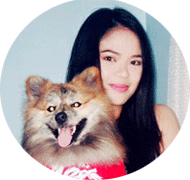 I am Lara Baylosis, a.k.a Doc Azkal, which translates to “the street dog’s doctor” in my vernacular. Read more...

By e-mail: info[dog]smartpetbox.com
By Facebook: My profile
Last articles