Some canine breeds always get stereotyped as dangerous. Because of this misconception, some cities and countries ban specific dog breeds even when animal behaviorists and pet experts say that any dog can be potentially menacing.

Fair or not, the following dogs are considered by the majority as the top offenders: The American Bulldog is a large utility breed that descended from the Old English Bulldog, which is now extinct.

Thankfully, a returning war veteran named John D. Johnson and other breeders resurrected the breed and re-established it as the American Bulldog.

Don’t Judge an American Bulldog by its Cover

American Bulldogs act reservedly with outsiders. Consistent socialization is necessary if you don’t want your dog to become suspicious of everyone.

Due to their working heritage, exposure to other animals is also critical at an early age. Unfortunately, most of these canines remain intolerant of other dogs of the same sex. Bringing them to the dog park may not be a bright idea.

But make no mistake about it because these canines can bond strongly with their hoomans. They feel happy and carefree when they receive lots of attention and love in the form of bacon.

American Bulldogs are great with children, too! A good example would be Petey from The Little Rascals.

During the Middle Ages, people use the term “Bandog” to refer to an umbrella of non-pedigree dogs of the Molosser strain.

The Bandogs of old worked mainly for protection work.

In the mid-60s, the term became popular once again, as Dr. Swinford strived to create the supreme guard dog.

The Bandog we know today is the result of crossbreeding the American Pit Bull Terrier, English Mastiff, and Neopolitan Mastiff.

Bandogs are silent but deadly protectors. These dogs would not alert intruders by barking. Instead, they will maim potential threats… or kill them they deem it necessary. These canines are absolute dangers to strangers! Unsurprisingly, the Bandog is a banned dog in many countries.

Nevertheless, there is a soft side underneath that fearful façade. With proper leadership, Bandogs can become family pets whose loyalty knows no bounds. They are also great with children when raised together.

Still, we discourage these fearsome protectors for first-time owners. These dogs need proper leadership — someone who knows how to communicate with them. Hitting them would only ask for trouble. The Neapolitan Mastiff has inhabited the earth since 1700 BC. This majestic breed has accompanied great civilizations and historical figures, including Alexander the Great who brought the first Mastino to Greece from India.

Neopolitan Mastiffs fought ancient wars alongside Roman soldiers. To get an inkling of how strong they are, they can fight head-on with bears, tigers, and lions.

The Gladiator of Dogs

These majestic canines are independent thinkers who have been intimidating intruders since the days of ancient Rome. Aside from wars and big game hunting, this majestic beast has also participated in the Battle of Hogwarts! Remember Fang?

Kidding aside, Neopolitan Mastiffs are fierce fighters, but they are also warm and affectionate furry family members. In fact, they prefer spending time with their family’s company and are willing to lay down their lives to protect them!

But because they are extremely wary of strangers, they require extensive socialization starting puppyhood. Otherwise, they will see your guests as potential enemies.

And because of their ominous size, it is wise to supervise a Mastino whenever he is around small children. There are many incident reports involving children ages three to four years old. The term “wolfdog” or “wolf hybrid” refers to any breed that resulted from mating wolves and dogs. Wolfdogs are either low -, mid- and high content.

Regardless, these dogs retain most of their lupine traits. Among the most successful wolfdog hybrids is the Czechoslovakian Wolfdog, which is the offspring of a German shepherd and a Carpathian wolf.

The practice started in the 1950s when the Czechoslovakian Special Forces wanted a canine for their special military operations. Unfortunately, many backyard breeders are jumping into the bandwagon for profit.

A Wolf in a Dog’s Clothing

Although dogs share most of their DNA with wolves, it took centuries of domestication to make the modern-day dog who he is today.

The wilder aspects of wolf hybrids demand more land and financial resources that the average pet owner lacks at his disposal. Additionally, wolfies will need rigorous activities to exhaust his high energy level.

Even if you can offer such a wolfdog will still overpower your ability to manage his prey drive and primitive instincts.

An average human is no match for its sheer size, strength, and bone density. Wolf Dogs are capable of doing more than just wreak your fence or infest your backyard with tunnels. Use force in a wolfdog, and it will teach you what a 406 PSI bite force is.

Moreover, wolf dogs are not safe around children and small pets due to their high predatory instincts. For these reasons, Dr. Karen Shaw Becker discourages owning wolf dogs as family pets.

Since 1986, Mission: Wolf has received over 10 000 phone calls from owners who want to disregard their wolf hybrids. 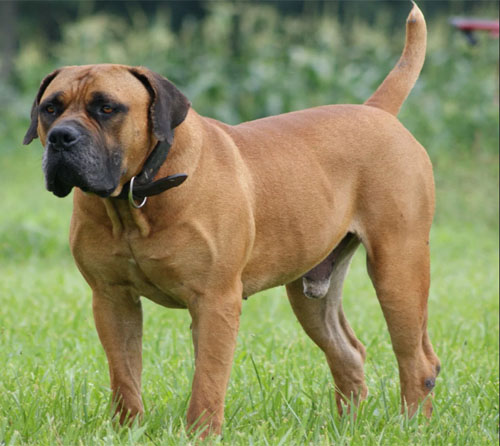 The history of the Boerboel is a murky one.

There is uncertainty as to which breeds it consists of.

But one thing is for sure — this South African breed used to defend homesteads against large predators, such as leopards and jaguars.

The Boerboel is the epitome of brains and brawn. With a bite force of 600 PSI, this dog can send a leopard back up a tree!

Their size, strength, and territorial nature make them exemplary guard dogs. But since scaring off rhinos and baboons are obsolete roles, the modern-day Boerboel are here to keep thieves at bay.

Despite their imposing presence, Boerboels are respectful, docile, and devoted towards their family. These canines are eager to please their hoomans.

But do remember not to leave them alone running free if you are expecting guests. When you do, you need to properly introduce your visitors and advise them to take things slow.

Still, this breed might be too much for the rookies to handle. The breed’s no-nonsense attitude and high intelligence demand a confident and consistent leader. A vast fenced-in yard to run and play is crucial for these canines as well. In 1928, Argentinian brothers Dr. Antonio Nores Martinez and Agustin Martinez set out to breed a dog capable of hunting boars and mountain lions in the challenging Argentinian countryside.

They picked the now-extinct Cordoba Dog to be the base and crossed it with an array of breeds, including the Great Dane, English Bulldog, and the Dogue de Bordeaux among many others.

The result is the courageously loyal Dogo Argentino.

The Dogo Argentino fancies a new battery of smells, which should come as no surprise due to his hound heritage. This breed is strong-willed, independent, and highly intelligent.

Thus, he demands an Alpha that is equally confident as he. Nonetheless, the AKC describes the Dogo as a lively, humble, and friendly canine.

As with any dog in this list, socialization and proper training is the key to a stable personality. This bad-ass looking canine hails from the beautiful Canary islands.

The Presa Canario is a historical war dog, but the initial purpose of this breed was to toil in fields and protect livestock.

The Presa Canario is still one of the most lethal canines to date due to several reported attacks associated with this breed.

Although many countries outlawed the Canary Dog, he is welcome and loved in his native land.

Instead of attacking the serfs, the Fila would grab them by the neck and wait for its master to arrive.

Faithful as a Fila

Filas are notable for their tracking ability, unforgiving temperament towards strangers, and agility when protecting their loved ones.

As a result, Brazilians coined the phrase, “Faithful as a Fila Brasileiro.” Despite extensive socialization, Filas will remain extremely protective of its family circle.

Thus, this breed may not be ideal if you expect frequent guests in your home. The Tosa Inu originated in the second half of the 19th century as a product of crossbreeding European canines to create the most vicious canine gladiator.

The Japanese Mastiff is not very friendly, and he can be downright aggressive.

Even with years of training, this samurai canine can still exhibit hostility towards other dogs and people.

Hence, this breed should be the only pet in the household, and young children should avoid them. The modern-day American Pit Bull Terrier can trace its roots back to the United Kingdom. Terrier breeds and Old English Bulldogs were crossed during the 1800s to develop a race that will manifest strength, agility, and tenacity.

These dogs earned their name from the fact that they were thrown in pits for hostile blood sports. Then immigrants flocked to America with their Pit Bulls before the English Civil War.

Any breed cultivated for aggression is capable of terrorizing your neighborhood.

Sadly, the reality is that Pit Bulls always get into inexperienced hands or those who want them for inappropriate reasons, such as illegal dogfighting.

Nonetheless, dog owners like the Dog Whisperer Cesar Millan have proven that frequent outdoor exposure and proper training practices will make a difference in this hated breed.

A canine bred with aggressive ancestors and is cultivated for aggression can strike terror into an entire neighborhood. However, these dogs will not attack without reason. They have a strong innate ability to fight and protect those they consider as their packmates.

When we look at notable problematic breeds, the list involves robust and intelligent canines. Our canine companions are a diverse species, and many factors affect their behavior.

Any dog deprived of socialization, training, and love will potentially become problematic, regardless of its breed. But when a toy dog makes a tantrum, nobody bats an eye because the damage is minimal. That is why we rarely hear news about Chihuahua attacks.

It is quite unfair to stereotype these dogs as dangerous. We should not forget Sgt. Stubby, a Pit Bull who engaged 17 battles on the Western Front during World War I.

Then there is Popsicle, another Pitbull, who worked for the federal government. These dogs are just a few of the countless misjudged canines who are capable of performing incredible feats.

How Does Frontline Work: The Best Tick and Flea Protection